"MAN IS THE MEASURE OF ALL THINGS"

Greek art addresses the search for ideal mathematical proportions in the figure and in architecture.

Art Reflected the Cultural Ideas of=

1. Isolation of Greek city states along coast line and island = self-reliance, emphasis on the individual

2. Greeks believe that their gods are idealized humans including passions and ambitions

3. Greeks attempted to define what it is to be a human being and to understand the individual’s relationship with the world around them

4. Plato believed that the world of visible forms was just a reflection of perfect truth, beauty, and goodness, which exists only  in a world of ideas. (Plato)

5. Rationalism: Belief that the intellect is the highest human faculty, that the universe was founded on rational (harmonic) principles, and that through knowledge one could decode the logic of the universe (Pythagoras). This filtered directly into art making and architecture.

6) The importance of the "Kallos' and 'Eu" in Polyclitus idea of symmetria and his belief that numbers /math defines physical and abstract reality.

Watch the Video on Late Classical & Hellenistic Greek Art Below

(if you have difficulty with the url address- please type in

*DETAILS & PURPOSE OF THE CELLA

*PURPOSE OF THE BACKROOM

*HOW THE GREEK CITIZENRY WOULD EXPERIENCE THE TEMPLE

*MEANING OF VOCABULARY WORDS IN RED 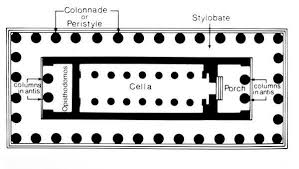 USE THE VIDEOS BELOW, KHAN ACADEMY 250 & THE LINK

RED Clay emerges from under the BLACK Paint